Insight into the industrial design process

Sustainability in an Industrial Enterprise – Is this possible?

Great solution for both sides

„Germany is known for its good training in construction industry. Moreover, promising career and earning opportunities exist.
I found out about this on the internet and sent an application.“ Hoai Thin Tguyen says. 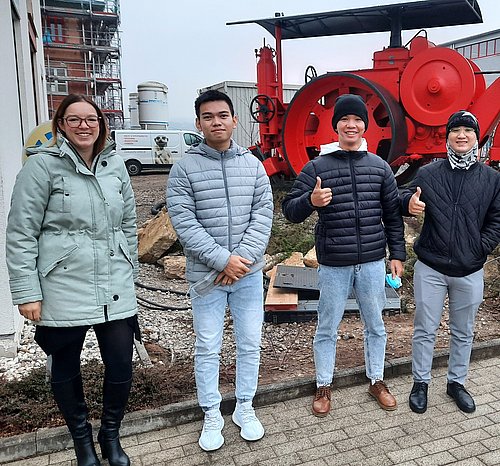 He is in his early twenties and is from Vietnam. Together with six other young men from his home country he does an apprenticeship as road builder/concretor at STREICHER Tief- und Ingenieurbau Jena GmbH & Co. KG.

Three of them started their apprenticeship in August 2021, the others are already active within their second trainee year. The arrangement was made by the initiative of the Bildungswerk BAU Hessen-Thüringen e.V. (BiW) – a win-win situation for all: young people of Vietnam get the chance for an apprenticeship in Germany and local construction companies like STREICHER even can fill company apprenticeship positions for which there are no or far too few applicants locally.

To leave home and begin a new life in another country is a special challenge also for the young generation. „We were very homesick at the beginning and had to get used to the cold weather in Germany. We didn’t know snow before“, Hoai Thin Nguyen tells us. Thanks to a permanent online German language course and a distributed employment in the construction site teams they are well integrated now and enjoy life in Germany.

For the best possible user experience, we use various services that use cookies and similar technologies. Some services are technically necessary and are providing basic functionality for this website. Others are used to analyse and improve your user experience or to provide you with certain services. For these services we need your consent, which you can withdraw at any time. Find more information regarding cookies and external content on our Data Protection Declaration and regarding us on the Legal notice.